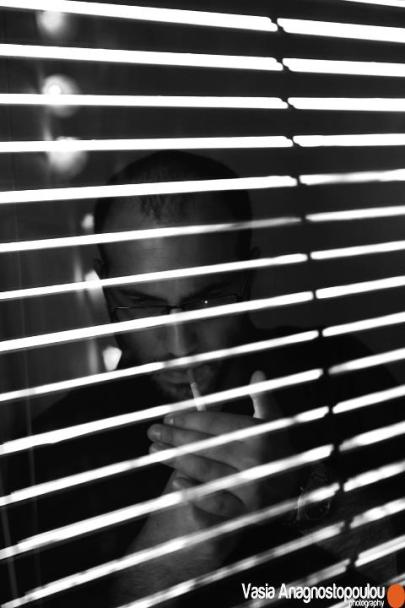 Poems selected and translated from the Greek
by Yiannis Goumas.

How much longer will you poets stay awake?
Were you to spend a thousand evenings
and yet another thousand starlit nights
you’ll always have in you what grieves you:
empty glasses
and fingers scratched by cruel verses.
Your distant lands will always be built on myth
and prayers will lie in ambush for yesterday
hanging on their shoulders
the saviours’ lovely arrow cases.

And who am I to talk?
A faceless usher of dreams.

Rough chest- thorns have grown
inside the shirt
the skin is copper-coloured
and the ribs are dry walls in barren fields.
His mind was ruined in this place
and the province
a merciless, loveless mother of a thousand and one deaths
and secret ledgers under the bridal bedclothes
turns the key
locking her lads out of the house.
He walked alone for long
alone he dug the earth till his nails
bled
but never did he breathe the clear sky
and the “being” of this world
like a castaway by birth
abandoned by roads and sweaty distances
he keeps on twisting and turning
in the grave dug by our stubbornness.

His mind was ruined
in his chest thorns have grown.

We set out in the world
each one looking for what‘s in store for him.
You say it’s in the war that you look for a kiss
and I tell you it’s the thousand years
that I’m drunk on a wooden mast
a wet rag, eyes dried northwards
hands clutching the rope of a subterranean truth
that I may seek a footprint of yours.
Poor writings of another parody.
We set out in the world
looking for discoloured railings
and the ghosts of a youth and a sullen spring
brows puckered up and loving
stray dogs basement bums
who never rested on spread out arms
what our need begets
and what only time can offer.

We set out in the world
each one getting what he deserves
and Colchis is taking years to appear.

Vivid are the colours hanging on walls
familiar scenes of past decades
oozing tobacco smoke
of incessant tight-mouthed puffing
and compulsive looks
eyes that have forsaken their morning star
and meet in low dim lights.
Friends as always the unfamiliar habitués
who keep on introducing themselves when they are short of drinks
hands extended
friends who always part a couple of hours before dawn
on the dirty steps of some memory.
Vivid are the colours hanging on walls
girls worn out
with serving coloured water all night long
in glasses cracked by endless clinking
changing names on chafed lips
now wipe our life like wiping a table;
on their hands the lines of battle
and the cloth wet with hidden memories.

Vivid are the colours
and like our years they hang shyly on verses.

I am looking forward to a paranoia
ignoring what the big shots have to say.
Verses residing in our bodies
have fractured our joints
and draw blood from the unsealed veins.
That’s why I am looking forward
to opening a way with the sword of love affairs
and a lasting wish given on first of April
wholesale
or a bit from your own grim fall
as a land barren from origin
never fortunate to suffer unjust slavery.
Tyrannically I look forward
-are you at least listening to me?-
and I’m relieved by the downfall of certain young hopefuls
unlined palms dig things to come
and pull down from scratch the ages’ truths
as if souls never sweat
or are in the habit of fasting love underground.

So I am looking forward
and though I possess a book of paranoias
I know that tomorrow the litany will end
and everyone will be interred looking at their watches.

Fooled by time
and the deep cuts of a myrrh-bearing spring
we walk up the stairs.
On our shoulders
pallid mourning and assortments of cheap
bygone tears
and questions left unanswered by human eyes.
In our hands
oars fastened with shrouds of Columbus’ galley
that someone else had first sailed her to the west
in his heart hanging
a load of curses by an enslaved, total generation.
At our feet
drag years in chains
scraped and trampled on a thousand times
begging like old women for some nostalgia
before passing away
clinging to the faded footprints.

How many more stairs remain?
How many years?
Well, either here or in Hades
time remains the same.

I want a cello to be playing for me as I pass away
and a moon that knows how to pace
and in addition
a maestro to put an end to what begins
and show me at last
a few of the end’s tools
something of what in life I avoid.

The young who grew into men just now
have for a haunt the haunt of old timers
they sit quietly at the bar
and order their mirror on the rocks;
good old symbolisms bygone jokes
and casual music for dried up tastes.
They roll the years without filter
and for paper they wrap indispensable poems
changing their rhymes and their “don’ts”.
They look suspiciously
they have their fishhook lying by the door
fully aware who’s coming and who’s waylaying.
From an early age they had read the story
lots of waste and no answer.
When will a breath soothe their bodies?
They write with earth and erase with rain
they are soaked working their papers by hand
but the pencil tireless on a straight course
for us an unruly plough
disciplined to them.

The young who grew into men just now
roll the years without filter
and look at us suspiciously like a wrong story.

My withered loves
smell of sulphur, their breaths of alcohol.
Boats made fast on the pier of a day
awake with a start
and faded by the midday sun
like a book I laid aside years ago
and remember but little now
sighing deeply and rubbing my eyes.
My withered loves
wear gowns and stiletto heels
throw their want on their shoulder and look at me puzzled
oiling their warped rifle
loaded long ago
and levelled, ironically, at their own breast.

My withered loves
have been hanging around for years now
and pass their life like an open parenthesis.

A birch tree is leaning northward
for years now dressed in black
her hair down to her waist
a girl withered in strange ideals
now pains memories
and sings men’s verses to herself:
our father who art in heaven hallowed be thy name.
She smokes, not a filter tip, in anticipation of the livings’ resurrection
and with her breath she censes the earth’s bones
as in the past fate censed her.
Time is ground in her headaches
and flows from her eyes
like the spring Aphrodite washed her body.

A birch tree stands in the north
her hair, yellowed foliage
offered without resistance
to the mortal tends of a so-called autumn.

Dust falls from on high
and here are we vexed about the future.
How can the soul rejoice after so much salt;
She drinks at night
and smokes sick verses at dawn
she sports gold-embroidered stoles
given by a slender hand
and lies to rest as the sun looks at her
as the sun makes her hair blond
and devoutly scalds her blood.

Dust falls from on high
and here words refuse to meet.

Zincs are playing music
this rainy all-night do.
A bunch of keys is up to Salome’s tricks
waiting for our head to lean on the empty plate.
No, I mutter sotto voce
I’m not the one who beat the sun hollow
or he who is beating the tambourine.

Take hold of this stone
open your hand and like a flash throw it in this sanctum
named sea.
Afterwards with silence grazing the lips
grab at the wave
and drag it out to drain
till you find the poems I used
to find you
to be able to look for you in this very death.

It took me years to realize
that the line was cut deep into the rock
and what pours out and roars is neither voice nor breath.
Years later did I realize
that glances tauten and spread day by day
leaving bare-breasted in the wind what hands build
and abandon like ships in full sail
what the muses sung melodiously under the willow tree.

Now as I watch you setting sail it occurs to me
that the port sustains yet another aspect
another look
which masses of azure seaweed cover with their beauty.

I got lost in corridors and passages
in the empty wakefulness of this barren age
and for years I hear how spectres weep
that we keep afloat in absent poems.

Hidden in memory’s
and soaked in blood and wine
I saw time’s unbroken stone
a hope’s last lamp
for struggles left incomplete
leaving behind an empty moon.

Loners multiplied in basements
for years angels hid the cause
they dug deep to raise the gallows
oldsters and babies turned to dust
trees renounced their fruit
and pains ceased without childbirth.

Fires were lit in all squares
all the dead were proclaimed saints
they rinsed sins with water
they wore tinplate panoplies
they put secret love affairs to the sword
threw irons and concrete in agonies.

Others petrified and didn’t participate.
Can you shut sorrow in a drawer?
Paper and stone, poems apart
from the folly poets didn’t have
in songs another sort of famine
a part of our life they didn’t have.

Hidden in memory’s jug
I seek the water’s inebriety
time isn’t defined with grace.
Did the hands of Achilles or Paris
bury the dead sun-god
with the shield upright on the grass?